I’m currently attending the CPATH (Canadian Professional Association for Transgender Health) conference in Vancouver. It’s a fascinating event which I’m hoping to write about more in the coming days. I’ll also be livetweeting whenever possible.

The first two days of the event are a “pre-conference” training session aimed largely at healthcare professionals, followed by a more standard three-day conference over the weekend. I’m fortunate enough to be attending the whole thing, funded through the ESRC-sponsored Trans Pregnancy project. I’m here to learn about how gender-affirming care is being practiced in North America, and to connect with people working in reproductive health and in supporting transition.

What’s really struck me so far is how much more intersectional and inclusive of actual trans people this event is when compared to professional events in Western Europe, particularly last year’s WPATH conference.

I was struck at the how the first pre-conference session I attended – billed as an introduction to gender-affirming care – had questions of diversity, power, and consent absolutely embedded into the presentations. Attendees were encouraged to reflect critically on their own privilege and social position, and that of key writers and trend-setters in the field. We discussed how social determinants of health (such as wealth, education, citizenship etc) play a huge role in determining inequalities within trans populations as well as between trans people and the cis majority.

These are pretty standard topics within sociology, but even so I felt the session was very well-presented and I learned a lot from the informative but open and deeply self-aware approach taken by the two presenters, Gwen Haworth and Jenn Matsui De Roo. It was immensely refreshing to see this kind of conversation take place in an event attended largely by healthcare providers. Too often, I feel clinical providers and researchers in the UK find themselves at loggerheads with trans patients. Often this may be because they haven’t thought to take a step back and consider the cultural context of their patient’s life and the systemic issues that this person might have encountered, let alone the deeply unequal power dynamic of the clinical encounter.

It was also really important for me as a non-clinician to take the time to listen to the stories and experiences of healthcare professionals, and learn more about the energy and care they put into the vital work that they do. I fear too many sociologists looking into issues around healthcare don’t actually attend medical conferences, and as such miss out from directly hearing about professional views and experiences.

I was also delighted to see that the space is pretty trans-friendly. People are generally sensitive around language, there are gender-neutral toilet blocks, pronoun stickers, and there’s also a “safer space” quiet room. At the WPATH conference last year, a number of trans attendees were attempting to make all of these things happen through forms of quiet guerilla disruption, for instance through putting holographic stickers on the toilets that switched between “male” and “female” images. At CPATH, trans language, trans culture and trans needs feel like part of the fabric of the event. 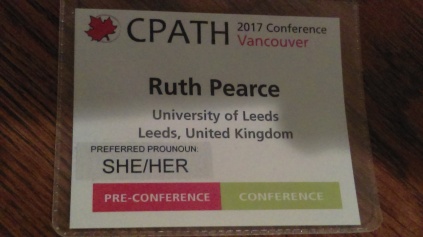 My CPATH 2017 Conference name badge.
Under my name is a sticker reading “preferred pronoun: she/her”.

Finally, it’s good to see that there’s a serious decolonial agenda at CPATH. The conference booklet acknowledges that Vancouver is built on unceded lands; there are numerous sessions led by indigenous practitioners, researchers and activists; indigenous perspectives and issues are regularly discussed by non-indigenous attendees; and the introductory plenary for the conference proper on Friday will feature an opening speech and talks from indigenous activists and healthcare providers.

Of course, while all of this looks good for CPATH, the progressive appearance of the conference can hide the struggles that make real inclusion and recognition possible. I’ve heard that the opening plenary was the outcome of a struggle over indigenous representation after a number of papers were rejected. So, however good CPATH looks to me as a (white, British) outsider, it’s important to acknowledge the ongoing, silent (silenced) work that so often takes place behind the scenes to make this happen.