[Edit 14/02/19 – the special issue has now formally been published, and is available here.]

I’m delighted to announce that the articles written for the Sexualities special issue ‘Trans Genealogies’ – edited by myself, Deborah Lynn Steinberg and Igi Moon – have now been pre-published on OnlineFirst.

While the creation of this special issue has been a particularly long and difficult affair, it was really fantastic to work with such interesting and thought-provoking articles. I’m really excited that we can now finally share them with the world.

The articles will be formally collated and published in a single issue of Sexualities in a few months’ time. This will be available both online and in print format, and I’ll no doubt be using that as an opportunity to once again encourage people to read them.

However, for now you can read the special issue articles here:

‘Boying’ the boy and ‘girling’ the girl: From affective interpellation to trans-emotionality
Igi Moon
[OnlineFirst]

Genderqueer(ing): ‘On this side of the world against which it protests’
Zowie Davy
[OnlineFirst]

Here’s what we have to say about the special issue content in the editorial introduction:

We open with JR Latham’s ‘Axiomatic: Constituting ‘‘transexuality’’ and trans
sexualities in medicine’. Latham provides a genealogy of medical becoming, draw-
ing the reader’s attention to the manner by which trans identities may be consti-
tuted in and through a pathologising discourse that retains the influence of
pioneering mid-20th century clinician Harry Benjamin. Through his elucidation
of four axioms of transsexualism, Latham also unpacks the role of sexuality in
the becoming/emergence of trans in medical settings, and explores the manner by
which we might arrive into entirely contingent spaces of gender subjectivity and
enactment that we nevertheless take for granted.

A second example of the disciplinary impact of categorical thinking is explored
in Kat Gupta’s article, ‘Response and responsibility: Mainstream media and Lucy
Meadows in a post-Leveson context’. Like Latham, Gupta describes how trans
might ‘emerge’ and ‘become’ through the interventions of non-trans actors: in this context, journalists writing about trans teacher Lucy Meadows after she came out
in the workplace. Meadows’ dreadfully sad fate is only compounded by the con-
tinued construction of an unwanted male identity for her in British newspaper
reporting. However, as Gupta carefully demonstrates, this was not entirely the
outcome of intentional prejudice: rather, the misgendering of Meadows emerges
through the subtle contingencies of repetitious reproduction and metacommentary.

The four articles that follow critique binary thinking from a range of perspec-
tives, and question both cis-normative and trans-normative approaches to categor-
isation. These articles ask how we might think about bodies and psyches in a more
open and ethical manner, informed by ‘trans’ discourse but with wider conse-
quences for understandings of gender and sexuality. They look at how we might
move beyond the axioms described by Latham and the cultural forces analysed by
Gupta, inviting us to consider how we might re-think our approaches to bodies and
identities, avoiding binaries in inhabiting these ideas while building new solidarities
and allowing new possibilities to emerge.

In ‘Rethinking queer failure: Trans youth embodiments of distress’, Katrina
Roen explores how we could seek to break from normative thinking, including
the transnormativities that have emerged with ‘trans’. Noting that trans youth
are frequently associated with narratives of distress and self-harm, Roen draws
upon Jack Halberstam’s concept of queer failure and Sara Ahmed’s feminist cri-
tique of happiness in order to ‘unsettle’ these narratives and imagine new trans
possibilities ‘that do not involve straightening or alignment’.

Igi Moon also looks predominantly at the experiences and narratives of trans youth in ‘‘‘Boying’’ the boy and ‘‘girling’’ the girl: From affective interpellation to trans-emotionality’. In their article, Moon argues that emergent trans discourses offer an important alternative to binary notions of emotionality. Moon describes ‘trans-emotionality’ as a pluralistic approach to understanding gendered feeling that has been made possible through non-binary and genderqueer peoples’ responses to experiences of sexual liminality and dis-orientation.

In ‘Genderqueer(ing): ‘‘On this side of the world against which it protests’’’,
Zowie Davy questions the categorical lines that are frequently drawn between
‘transsexual’ and ‘genderqueer’ trans identities, desires and bodies. Revisiting a
series of interviews from the early 2000s, Davy employs the Deleuzian notion of
‘assemblage’ to question frequently taken-for-granted assumptions around trans
difference. She asks us to be reflexive in our understanding of the terminologies of
trans, transsexualism, transgenderism, genderqueer and non-binary; terminologies
that can be used to help us understand specificity but which can also be used to
close down analyses of connection and similarity. In this way we are effectively
encouraged to be attentive to the limitations of a ‘non-binary’/‘binary’ binary in
our accounts of trans possibility.

An optimistic account of such possibilities is provided by Ruth Pearce and Kirsty Lohman. In ‘De/constructing DIY identities in a trans music scene’, the authors draw upon a case study of an ‘underground’ scene in the UK to explore how trans discourses and everyday political approaches can feed into processes of cultural production. This offers an insight into what possibilities might emerge and flow from ‘trans’ as a pluralistic approach to gender and identification.

The issue closes with an account of Malaysian legal and media advocacy, ‘Mak
nyahs and the dismantling of dehumanisation: Framing empowerment strategies of
Malaysian male-to-female transsexuals in the 2000s’. In this article, Joseph N Goh
and Thaatchaayini Kananatu effectively revisit a range of themes from across the
special issue: processes of becoming and definition (including self-definition
as well as being defined by others) and the manner in which activism intersects with the media and law as well as the medical and political establishments. Like the UK case studies, this account is one of both specific importance and broader relevance. It is vital to acknowledge the particular context of the struggles for gender liberation by mak nyahs in Malaysia: a context shaped both by local law and religion, and the
complex post-colonial impact of Western discourses and political interventions.
The emergent language of mak nyah identity effectively stands in opposition not
only to the cis and binary gender norms of conservative politics and religious
fundamentalism, but also to a homogenised white, Western, Anglophone discourse
of ‘trans’. At the same time, Goh and Kananatu highlight how high the stakes are
and how difficult the battles for liberation can be for gender diverse peoples around
the world, in an important account of the dangers and possibilities that come with
‘trans’ visibility.

I hope readers find the special issue articles as fascinating, challenging, and useful as we did. Enjoy! 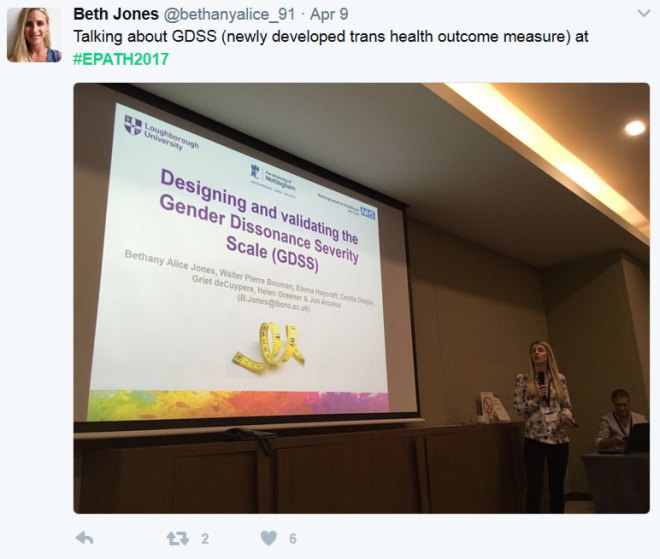 I can see why some practitioner-researchers might think this is a good idea. The clinical protocols at GICs such as Nottingham currently require trans patients to demonstrate that they can cope with living a “trans” life in order to access “irreversible” treatments such as hormone therapy. At present, this is demonstrated through patients’ adherance to the “Real Life Test”.

“[I]t is the view of many clinicians working in the field – including some of whom are transgender themselves – that living as their experienced gender allows individuals to test their gender identity in the real world before the initiation of potentially irreversible treatments […] transgender people who have poor social and interpersonal skills may be more likely to encounter difficulties when socially transitioning.. […] In order for an individual to be accepted for treatment, they need to socially transition first, which includes not only living as their experienced gender but also changing their name and most legal documents.

Wouldn’t it make life easier for clinicians though, if they could also ascertain whether or not their patients feel sufficiently trans?

Enter the Gender Dissonance Severity Scale, which aims to explore “how people feel about their gender, body and quality of life”.

What is being measured?

There are a number of problems with the concept of the Gender Dissonance Severity Scale. The most fundamental is the question of how far you can adequately and consistently measure feeling.

This is a particularly a problem for nebulous concepts such as “gender dysphoria” and “gender dissonance”. That these phenomena exist is not in doubt – many trans and non-binary people across the world can attest to the reality of dysphoric feelings in relation to our bodies and/or gender roles. But these experiences vary greatly from individual to individual, mediated by collective factors such as social context and culture as well as individual differences.

So any attempt to measure gender dysphoria or dissonance may be thwarted by the ever-shifting nature of the thing that is supposed to be measured. One person’s dysphoria can be another person’s euphoria. And a measurement that is “accurate” for a patient on one day might be “inaccurate” on the next.

Who is doing the measuring?

In recruiting participants to assist them in developing the scale, researchers based at Nottingham GIC have argued that the scale will help measure the “effectiveness” of treatment: i.e. how interventions such as hormone therapy and surgeries improve patients’ quality of life. This is no doubt an admirable goal, and will expand upon existing evidence that trans people benefit from having transitioned.

However, there is another proposed use for the scale, as described in the following excerpt from a request for research participants.

From the findings, we hope to develop a new outcome measure that could be used by GP’s to make referrals to transgender health services.

This is a very troubling proposal. It suggests that the Gender Dissonance Severity Scale could perhaps be used as a form of screening mechanism before trans patients are even referred to a gender clinic. Patients could perhaps be refused treatment altogether if they don’t appear to be “dissonant enough” according to the blunt measure of the scale.

Pre-prepared questionnaires are already being used to assess patient distress for those needing to access NHS mental health services through IAPT. Patients are often invited to answer questions on the phone, with access to services depending on how well they meet the questionnaire criteria.

It seems therefore that the Gender Dissonance Severity Scale could potentially be used as an additional layer of gatekeeping, reducing referrals to gender clinics (which are currently seeing a record number of patients) at the expense of those in need of care who happen not to meet the specific criteria of the test.

Of course, trans patients have a long-standing approach to dealing with barriers to care: we share information amongst ourselves, learning the “right answers” to give in clinical contexts. This is great for the individual trans person who wants to jump through the necessary hoops in order to access care, but an awful situation for clinical research, where supposedly firm findings might be built upon the decidedly shaky foundation of trans people making up the answers that they think clinicians want to hear.

There is already a lot of mistrust between many trans patients and gender identity specialists. The development of flawed measures such as the Gender Dissonance Severity Scale may only compound this.

While Nottingham GIC does have at least one trans clinician involved in developing their research programme, they have yet to engage more widely with the trans research community. Moreover, few opportunities exist for clinicians to learn about their patients’ desires and interests outside of a context where they have a great deal of power over said patients’ healthcare. But these are issues that can be addressed: through better community outreach, communication, and collaboration, as well as reflexivity and humility on the part of researchers.