There are a couple of looks I am very familiar with as a trans person.

One is primarily a look of confusion. It is the kind of look you might expect to receive if you were wearing a boot on your head. You have disrupted the everyday order of things, and people don’t know how to respond.

One is primarily a look of disapproval, communicating a barely-contained sense of disgust or revulsion. It is the kind of look you might expect to receive if you have smeared shit all over your face and are walking down the street as if nothing is wrong. You have disrupted the everyday order of things, and people are very unimpressed, but perhaps aren’t quite yet ready to shout or spit at you. But you imagine that they would quite like to.

I’m very used to these looks because I have received them a lot over the course of my life. More often when I was younger, my face and body as yet unchanged by oestrogen. But I still receive such looks now and again to this day, particularly when I put less effort into conforming to stereotypical expectations about how a woman should look or carry herself. Perhaps I have put on less makeup, or I am wearing baggy clothes, or I haven’t brushed my hair for a couple of hours.

Other trans people – particularly other trans women, and especially trans women of colour – are less fortunate than me. People don’t just look at them. The looks are merely where it starts. Then people shout at them, or spit, or throw stones. People pinch their arses or grope their breasts. I hear these stories from my trans friends pretty regularly. It’s like everyday sexism with the volume turned up.

They do this because we are revolting.

It starts with a look. Call it the cis gaze.

Today I saw so many looks of confusion and disapproval. I felt the revulsion. It was visceral. It was contained. It could not harm me. I was amongst hundreds like me.

Today I took part in a Trans Pride march for the first time. 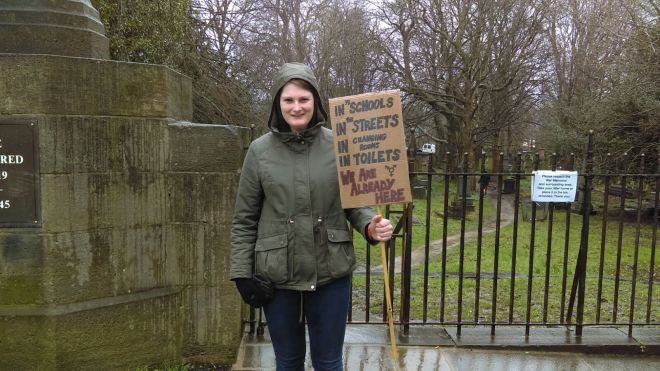 Waiting for a bus before the march. Photo by Sophie Wilson.

Trans people have, of course, taken part in LGBT Pride marches for as long as they have existed. Trans Pride marches, however, are a relatively new phenomenon. The first Trans Pride in the UK took place in Brighton in 2013.  I attended Trans Pride Leeds, which is in its first ever year.

I have previously marched in LGBT Pride parades in Birmingham and London, and attended Pride parties in Coventry and Leamington Spa. On these occasions, people throng the streets. There is a sense of celebration. There is a giant street party. People come out to see the happy gays. They mostly look on with enjoyment. It is a family affair.

At Birmingham Pride one year, I was stopped by a “community safety officer”, who objected to my placard. It was not family friendly, he said. If I didn’t destroy or cover it up, he would call a police officer and I would be arrested. At London Pride one year, some people sought to control entry to a women’s toilet, ejecting at least one trans woman in the process.

But: there are a lot more cis gay, lesbian bi and queer people at LGBT Pride than there are trans people. We disappear into the crowd. We cause less confusion. We bring less disapproval. We do not so easily revolt.

Today is Trans Day of Visibility, apparently. In the UK, trans people are more visible than ever.

Visibility has brought new dangers. We are currently subject to an unprecedented hate campaign in the media, spearheaded by “respectable” publications such as The Times and The New Statesman. On the Internet, we have attracted the dangerous attentions of a resurgent neo-nazi movement, their anti-trans campaigns bolstered by useful idiots who claim to oppose trans rights in the name of feminism.

Visibility has brought new opportunities. We see more of one another. We are more organised than ever. We have grassroots organisations in every city. We are producing art, music, plays, and films that speak to our own interests and concerns. We are marching in protest, we are marching in Pride. We seek gender liberation.

It will be a very long, very hard fight, but we are going to change the world.

Today I saw so many looks of confusion and disapproval. I returned the gaze. I held my placard high. I shouted, joyously. They could not harm me. I was amongst hundreds like me.

I could not, would not be shamed, for I felt the power of Pride.