For the past couple of years, I have been working quietly on a new edited collection with my colleagues Sonja Erikainen and Ben Vincent. It is titled TERF Wars: Feminism and the fight for transgender futures. 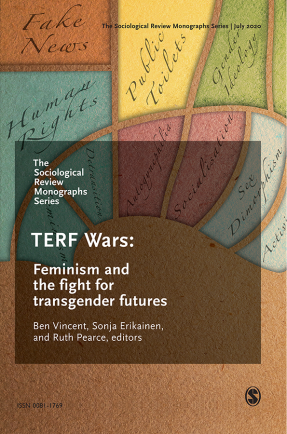 Read the Introduction for free

Our aim has been to provide a critical, scholarly response to the growing circulation of both “pro-trans” and “anti-trans” ideas within feminism, especially in the academic context in which we work. As the “trans debate” has grown ever more extensive and complex, newcomers often express confusion around why this has happened, what the fiercely contested language actually means, and how it has all become so polarising.

I am proud of what we have achieved, and hope the collection will serve to move some of these debates forward. However, I also believe it is important to emphasise that trans people face far more significant issues than debates within feminism.

I have long felt that the “TERF wars” are a distraction from the endemic discrimination and gross inequalities faced by trans people in all areas of public and private life. There is a reason that my own research and activism has focused primarily on healthcare, both before and during the editing of this collection (which I have very much treated as a side project). Arguing with strangers about sex and gender on Twitter won’t reduce waiting lists or stop doctors from sexually assaulting patients. Equally, it becomes harder to concentrate on the task in hand when vicious anti-trans columns are constantly published in the mainstream media, and when your research plans are derailed by a malicious Freedom of Information requests from anti-trans campaigners hope to access your work emails.

There is no easy solution to this conundrum. However, I urge readers to consider how they, personally, might aim to move beyond the TERF wars. My main hope for this edited collection is that will be helpful for people to better understand this particular realm of transphobic discourse, and to counter harmful and inaccurate arguments. Having done so, I urge you to turn to the real tasks of trans liberation: fighting sexism, racism, and ableism, protecting personal autonomy, building collective solidarity and mutual aid networks, providing services to our communities, and imagining new worlds.